You’ve seen the ads. Maybe you’ve already read a few Ninja Creami Reviews but you are still wondering, is the Ninja Creami worth the money? Ultimately, you’ll decide that for yourself. We’ve spent hours with the Ninja Creami and it certainly has its pluses and minuses. 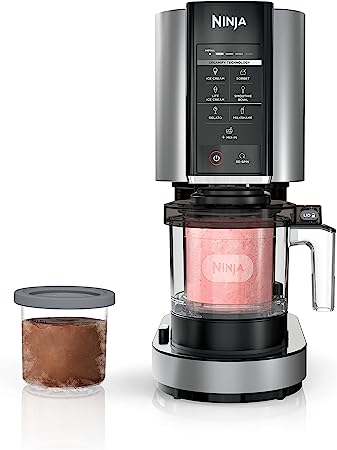 Buy from Amazon
Read Full Review
We may earn a commission if you make a purchase, at no additional cost to you.

What Does the Ninja Creami Do?

1 Big Takeaway from Our Testing

Other than making full-fat ice cream, there are other devices that make these treats better than the Ninja Creami. However, it is the most affordable device that can make all of them.

4 Reasons to Buy a Ninja Creami

Alright, let’s get into the meat and potatoes of this review. Our Ninja Creami Review has four reasons why you’d want to buy the device.

#1 – The Ninja Creami is Dang Good at Making Ice Cream

Ice cream seemed like an obvious place to start with our testing. So right out of the gate, we made the vanilla ice cream recipe that was in the accompanying “cook book.”

How Does The Ninja Creami Compare to Traditional Ice Cream Makers?

Traditional machines work by constantly freezing the ice cream on the sides of a drum and then scraping and mixing that ice cream back into the mixture. They also require a lot of ice, salt, and prep work. That is not how the Creami works.

To make ice cream with the Creami, you make and pour your liquid mixture into one of the three pint-sized containers. Then you place it into the freezer for 24 hours.

After 24 hours, you’ll remove the frozen pint of liquid and place it into the larger, outer container. Then you’ll place that into the Ninja Creami.

After you make the ice cream selection on the touch controls, the Ninja Creami scrapes and mixes the frozen liquid until a smooth, creamy ice cream remains. The processing usually takes about 2 to 2 ½ minutes.

In our opinion, the flavor of the ice cream was as good as the homemade ice cream we had growing up in the 80’s and 90’s. My husband agreed.

Often times, the initial processing of ice cream is crumbly. Most of the time, this can be cured by using the “Re Spin” feature.

When we mixed our vanilla ice cream, we also tried out hand at a chocolate ice cream recipe. There is a recipe in the cook book but my husband decided to deviate from it slightly–because of course!

Long story short, the chocolate ice cream came out more crumbly than creamy. The manual actually talks about what to do when this happens. You are supposed to insert the container back into the Creami and use the Re-Spin feature to mix the ice cream again.

We tried it and the result was actually good. Not as creamy as the vanilla but still pretty good.

#2 – The Ninja Creami Replaces Up To 4 Appliances

When it comes to desserts, a Ninja Creami can replace the following kitchen appliances:

Let me be very clean on one thing. The Ninja Creami doesn’t do as good of a job as some of the appliances it replaces.

If you say a good ol’ Dairy Queen Blizzard is a 10, then I’d put a Ninja Creami Mix-In Blizzard at maybe a 8.5… maybe a 9. It can’t process the mix-in ingredients as well as the high-powered commercial equipment, but it’s not a big drop-off.

How to Make a Mix-In Concoction

To make a mix-in using the Ninja Creami, you must do the following:

The result is actually good. But you are more limited in the ingredients you can use than you would be using a more powerful stand mixer. If you want to mix in chocolate chips, the user’s guide suggests using mini chocolate chips versus regular-sized chips.

The guide is also pretty adamant that putting the wrong things inside your mixer can damage the device and possibly void your warranty!

The result was tasty but it there was noticeable unmixed pineapple cream in the smoothie bowl. We processed it again and the result was better but still not what you’d get with a high-powered blender.

Other than ice cream, making sorbets was one of the reasons I looked forward to writing this Ninja Creami review. Sorbets, like everything else, are quite easy to make. The recipe we tried called for filling up the container with canned pineapple, including juice.

After a 24-hour deep freeze, we were ready to process!

I ended up classifying the resulting sorbet as “okay.” Certainly not great, but not terrible either. It ended up being very delicious and I’ll make sorbets using the Ninja Creami again.

However, the entire mixture of frozen fruit was not “sorbet-ified,” even after using the re-spin feature.

Most of the fruit on the counter wall was never fully processed. The result was a mixture of sorbet and of frozen fruit. Don’t get me wrong, it wasn’t terrible. But it wasn’t a smooth, uniform sorbet like I had hoped for.

The final thing we made was a milkshake, which turned out great!

How to Make a Milkshake with a Ninja Creami

To make a milkshake with a Ninja Creami you must first make an ice cream. Then, you’ll add milk to the ice cream while it’s still in the container. You’ll then place the container back into the Ninja Creami and select “Milkshake.”

The result was actually quite good. It was a little thicker than I would have liked. It was somewhere in between a soft serve and a milkshake. I could have added more milk and processed it again to get it perfect, but I never did.

This Ninja Creami review fully endorses the Creami as a milkshake-making device!

This is one of the biggest strengths of the Creami. It only takes a minute to prepare most ice cream recipes. And after a 24-hour freeze, it takes just 2 – 3 minutes to make the ice cream.

You don’t have to lug out a huge ice cream machine, add a bunch of ice and salt, and go through that process. You just pour, freeze, and Creamify!

It does require a bit of planning, however. The 24-hour freeze requirement takes a little planning. But in terms of you actually have to do something, the Ninja Creami saves a lot of time.

Cleanup of the Ninja Creami is a breeze. Just remove the lid and paddle from the container and place everything in the top rack of your dishwasher.

Buy from Amazon
Buy from Ninja
We may earn a commission if you make a purchase, at no additional cost to you.

4 Reasons to Not Buy a Ninja Creami

Alas, not everything is sunshine and roses. While this Ninja Creami Review has been overwhelming positive towards the device, it isn’t without it’s share of drawbacks.

#1 – It is Excruciatingly Loud

The Creami is unpleasently loud. Unless you’ve already lost part of your hearing, you may find the noise level to be unbearable. Wear ear plugs or be prepared to stick your fingers in your ears!

#2 – Mixes Routinely Aren’t Creamy on the First Round

In our testing and in speaking with others who own the Creami, most mixes need to be processed multiple times to achieve the desired level of creamy texture. This isn’t deal killer for us. Despite having to reprocess, it still requires much less hands-on time compared to traditional ice cream makers. But it is rather annoying to remove and then reinsert the container multiple times.

#3 – It is Expensive Relative to Traditional Ice Cream Makers

It’s easy to find a 4-quart electric ice cream maker for $40 – $50. The Ninja Creami’s MSRP is 4 times that amount. But if you value your time a lot, the Ninja Creami is definitely worth considering.

The Ninja Creami is a neat device! As long as you can plan ahead, you can quickly and easily make frozen treats without expending a lot of time or effort.

The device is versatile but excels most at making ice cream. If you can get by the quirks of having to process treats multiple times as well as the loudness, then you'll be happy with your purchase.

Buy from Amazon
Buy from Ninja
We may earn a commission if you make a purchase, at no additional cost to you.

Yes. Just place the lid back on the container and place the container in the freezer. When you are ready, you can reprocess the remaining dessert using your Creami. Or, you

Is the Ninja Creami dishwasher safe?

The pint-sized containers, the paddle, and lids are top-rack dishwasher safe. Do not place them on the bottom rack of your dishwasher. Alternatively, they can be washed by hand.

Does the Ninja Creami actually work?

In our testing, the Ninja Creami makes outstanding ice cream. Sometimes the ice cream is crumbly but that is usually solved by using the “Re Spin” feature to reprocess the ice cream.

Is the Ninja Creami loud?

The Ninja Creami is very loud.

How does the Ninja Creami work?

How large are the containers on the Ninja Creami?

The Ninja Creami containers hold up to a pint of ice cream or other frozen treat. If you want to make a gallon of ice cream, you’ll need 8 of the pint-sized containers.

What colors does the Ninja Creami come in?

The Creami is available in Black, Blue, Red, Rose Gold, Silver, and White.

No votes so far! Be the first to rate this post.

We are sorry that this post was not useful for you!

Juicingjournal.com aims to provide you with science-based nutrition tips and advice, match you with the best tasting juices and smoothies, and help you find the perfect juicer, blender and all the new kitchen appliance to make healthy and tasty meals. Learn more →